Head and shoulders is a pattern of technical analysis.

It occurs after a long uptrend. This figure indicates a possible reversal of the trend.

The model consists of three tops: the average top rises above the side tops.

On a rising trend, the price sets a new top.

After a pullback, the price forms another top, which is higher than the first one.

The condition of an upward trend is violated, in which each top acts as a support level for subsequent recessions.

On the next rise, the price cannot exceed the last maximum and falls, possibly with acceleration and gaps.

You can see on the Head and Shoulders pattern in the figure below: 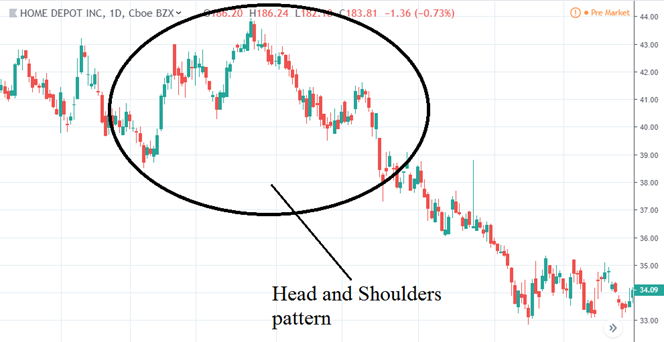 In an ideal figure, the shoulders are flush and symmetrical.

However, in reality, the right shoulder may be slightly higher or lower than the left, wider or narrower.

A lower second shoulder increases the likelihood of a trend reversal (like on the figure above). There are also more complex models with two heads or double shoulders.

The neckline usually has a slight slope upward, but may be horizontal or sloping downward.

The latter case confirms the weakness of the market. However, the breakthrough of the support line and the formation of a sell signal will be delayed.

The model is complete only after the price breaks down the neckline.

The price may return to the support line (which becomes the line of resistance) and push it away from the bottom.

The longer the figure was formed (a month or more on a daily timeframe), the higher its reliability.

We recommend selling stock after the formation of the right shoulder at the bottom of this shoulder.

The target price can be set below on the distance equal to the distance between the top of the head and the bottom of the lower shoulder.

Therefore, all information regarding the signs, possible problems, signals, and opinions is also valid for this figure.

Reverse Head and Shoulders pattern is formed when the stock breaks out of a bearish trend limited by the price channel.

The price chart tests the previous resistance line, which has now turned into a support line.

The shoulders have the same height, and the top of the head is below the tops of the shoulders. After breaking the line, it turns into a reliable resistance line.

The Reversed Head and Shoulders figure is given in the figure below: 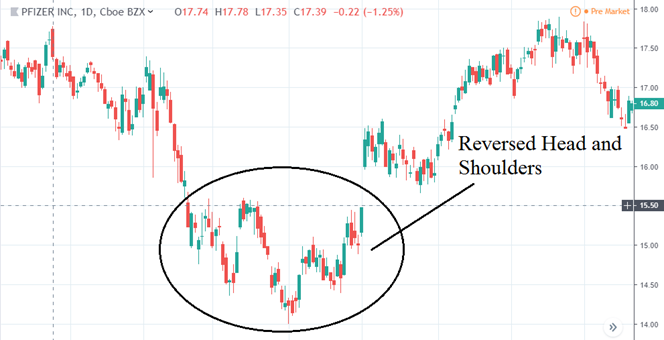 Trading volume plays a key role in the formation of a Reversed Head and Shoulders.

A sharp increase in trading volumes must confirm the breaking of the neckline.

Traders consider signal as false in the previous condition is not met.

For a more detailed step-by-step strategy, Check Out This Article

Important Disclaimer: Learn to Trade for Profit provides educational education. We are not trading advisers and we do not make suggestions to our visitors to buy or sell any particular commodity or security. The information on our website is based on personal opinions and is to be used for educational purposes only. Any actions you take based on the information on our website is to be at your own discretion. Trading Is Risky: Never, ever trade with funds that you cannot afford to lose. All trading investments (Forex, stocks, options, futures, etc.) are risky. Never trade with borrowed funds or your life savings. U.S. Government Required Disclaimer: Commodity Futures Trading Commission. Futures and Options trading has large potential rewards, but also large potential risk. You must be aware of the risks and be willing to accept them in order to invest in the futures and options markets. Don't trade with money you can't afford to lose. This is neither a solicitation nor an offer to Buy/Sell futures, stocks or options on the same. No representation is being made that any account will or is likely to achieve profits or losses similar to those discussed on this web site. The past performance of any trading system or methodology is not necessarily indicative of future results.